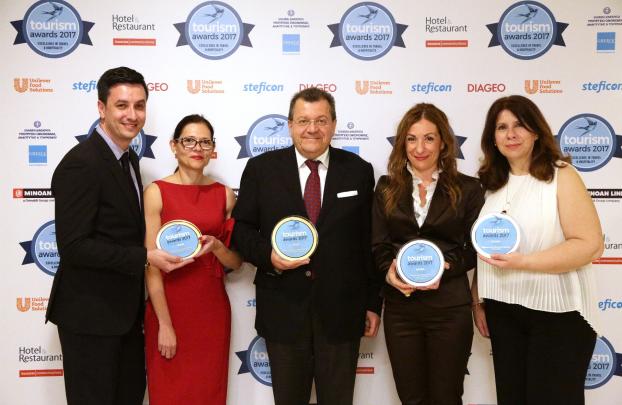 Minoan Lines gained four notable and very significant distinctions at this year’s TOURISM AWARDS 2017, which were held at the ATHENAEUM INTERCONTINENTAL hotel on March 21 2017.
Minoan Lines, despite the high competition from other companies and services of international scale and scope of our country’s tourist industry, managed to gain Gold and Silver awards in the most important categories of the competition, in an impeccably organized event attended by tourist representatives and operators.

This award is mainly attributed to our company for its sponsorship of the humanitarian missions of the “Doctors of the Aegean” (PAGNH hospital) Group to remote Aegean islands and isolated parts of Greece.  Their primary objective is the voluntary provision of health care services to the population of the said places.
The award was received by Mr. Antonis Maniadakis, Managing Director of Minoan Lines.

2. GOLD AWARD in the category "Online presence and communication" for the NEW Minoan Lines’ Online Booking System, the best one in the Greek Coastal Shipping sector for its functionality.

An innovative, flexible and modern Online Booking system that fully meets the requirements of the modern traveler.
Furthermore,  it is unique and practical in its use which allows the customer to book tickets for the destination of his choice easily and quickly, following the logic of both an e-commerce site (selection of filters, basket etc.) and the Online reservation systems of top airlines.
The award was received by Mrs Katerina Apostolidi, Communication Manager and Mr Giannis Androulakis, Head of Passengers Web Sales of Minoan Lines.

3. SILVER AWARD in the category "Greek cuisine / Promotion of the local cuisine” for the Enhancement of Cretan Traditional Organic Products and Greek tastes on board Minoan Lines’ cruise ferries.

The main concern of Minoan Lines’ administration and its services is the promotion of locally produced quality products of Crete and the exploitation of its rich wine tradition that the island has had since ancient times.
At the same time, its goal is also the strengthening of the island's producers within the primary sector.

With these elements as its main objective, the company through the renewal of its fleet, has created the right conditions and proper facilities on board its vessels’ dining areas (restaurants) so that the Greek cuisine can be promoted and the local Cretan cuisine be further developed.
The highlight of this effort is the use of local extra virgin olive oil in the preparation of all dishes and the enhancement of old Cretan cooking recipes.

At the same time, many Greek producers are being promoted for free through the disposal/distribution of their products (bottles, packaging, etc.) in the restaurants, bars and coffee points of our company’s cruise ferries.
Finally, it is worth noting that on board the restaurants and bars of Minoan Lines’ cruise ferries, the Cretan wine is promoted, offering many different options and choices from local producers and their varieties to lovers of the good local Cretan wine.
The award was received by Mrs Fotini Michailidi, Hotel Department Responsible of Minoan Lines.

4. SILVER AWARD in the category "Customer services" for Minoan Lines Bonus Club & the Customer Service Department of the Company
MINOAN LINES BONUS CLUB is a CUSTOMER LOYALTY PROGRAM enjoyed on a daily basis by all those traveling with Minoan Lines’ cruise ferries and provides unique benefits to its members, rewarding essentially the travelling public for its trust and preference in the company.
This pioneering program of Minoan Lines is in its 12th year of operation – it started on 1/4/2005 - numbering 275,000 registered members from around the world, thus, proving in practice its huge appeal and benefit for the traveling public, both within Greece and abroad.

The program is based on new technologies; it is one of the most functional and flexible programs in the field of transportation, with its main advantage being its simple - easily understood by the passenger operating philosophy.

Its members are rewarded and take advantage of discounts and benefits, both on the company's services (tickets, transactions on board the vessels) and products and services of other providers and companies in the context of their cooperation with Minoan Lines.

CUSTOMER SERVICE ... priority to the passenger!
Minoan Lines has adopted since its first day of operation a strong customer focused and service oriented philosophy.

Having as its primary concern a more personalized open communication with its customers, the company has created an interactive, two-way

communication network by using effectively the recommendations and observations/remarks of its customers setting as its first priority the management and solution of their requests, queries and complaints.

Minoan Lines’ Customer Service Department is manned with skilled personnel within an excellent infrastructure, which has the ability to serve the needs and demands of the traveling public throughout Europe.

The department operates on a daily basis and it is constantly developing based on the new technological international standards in this field, but also on the continuous training and education of its efficient and under strict specifications selected staff.
The award was received by Mrs Lisa Mastoraki, executive in Minoan Lines Bonus Club & Customer Service Department.