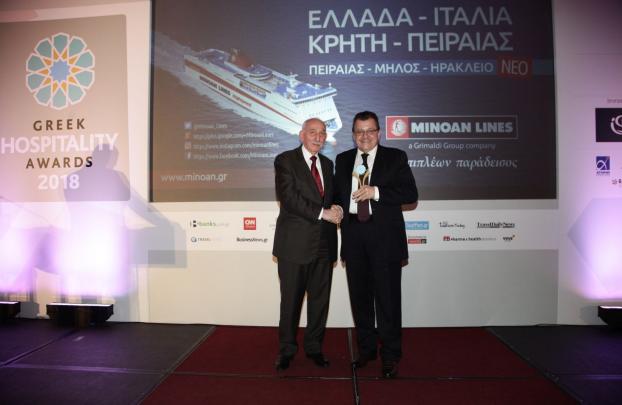 MINOAN LINES GAINED THE GOLDEN AWARD, DURING THE GREEK HOSPITALITY AWARDS 2018 CEREMONY, AND WAS PROCLAIMED AS THE "BEST GREEK COASTAL SHIPPING COMPANY"

Minoan Lines gained the Golden award and was proclaimed as the "Best Greek Coastal Shipping Company" during the Greek Hospitality Awards 2018 event, in a glorious ceremony organized for a fourth consecutive year by Ethos Awards and the Money magazine, at the Divani Apollon Palace & Thalasso Hotel, in Kavouri on Friday, February 23rd, 2018.

This distinction represents a great honor for Minoan Lines due to the significance of the institution in the Greek Hotel and Greek Tourism sector as well as the public’s participation in the voting along with the evaluation/assessment by the jury committee.

The company's business excellence, which continues to be at the forefront of the passengers’ preference and confidence, is demonstrated, offering quality services on board its luxury cruise ferries operating on the routes of Crete and the Adriatic.

The award was received by Mr. Antonis Maniadakis, Managing Director of Minoan Lines.