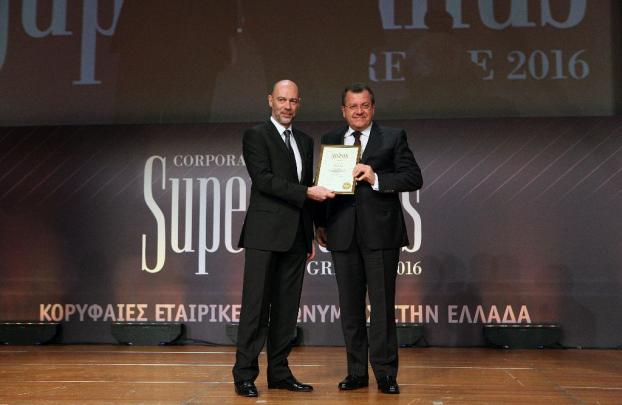 At a premier award ceremony, which was organized for a fifth year by the esteemed international organization in the field of brand management & marketing “Corporate Superbrands Greece 2016”, MINOAN LINES, a proud member of the Grimaldi Group, has been proclaimed as the ferry/shipping company with the top/best corporate brand name in the Greek passenger shipping sector for 2016 in the category “Transportation”.

The event was held at the Megaron Athens Concert Hall on Monday, 20th March 2017.

This distinction is of great significance for MINOAN LINES, given the respected reputation and high profile of the said institution, which takes place every two years in Greece; it is considered an exceptional recognition given the high competition in the respective sector.

MINOAN LINES, for a second year (2011-2012 and 2016-2017), is proclaimed as a winner in its category, a distinction that demonstrates the value of the company which continues to be a top preference for its loyal passengers, enjoying a high level of confidence and trust from them, a TOP OF MIND AWARENESS position (which selects the companies to be awarded), due to the serious and continuous effort made by its administration and personnel, on land and at sea, for quality and safe transportation of people and goods provided on board its luxurious cruise ferries operating on the domestic route/Crete (Piraeus - Heraklion) and in the Adriatic Sea (Patras-Ancona and Patras-Venice).

The award was received by Mr. Antonis Maniadakis, Managing Director of Minoan Lines.

“Corporate Superbrands Greece 2016” is part of an international/worldwide brand assessment organization “Superbrands”, which aims at identifying and paying tribute to the most exceptional companies operating in Greece in 39 sectors of the economy as the leading market brands in their field.

The selection of the company as the Top Corporate Brand in Greece in 2016 in the category “Transportation” is the result of a relevant voting based on the opinions of both a Council/Jury, consisting of renowned marketing experts/authorities/business professionals and thousands of Greek consumers through a Survey that was conducted.